More random blogging, you say!? Okay! I’m up for it. 🙂 It’s relevant to the season anyway–it’s all about New Years Resolutions. For 2019–my resolution is my career. I think I made mention of that a few blogs ago. It’s time to get moving again on what I do, and, with the turn of the year, it seemed like a fitting time. Plus, 2019 will probably hold some bigger, personal, changes–so, my career, and my art, will be as necessary as it is comforting. My 2018 resolution though, well, that’s what I’m here to talk about today–it’s actually the first resolution I have ever kept.

For the past few years, I had been craving more community. I had been trying to get involved more with volunteering, and I had been hoping to meet some new people. On the personal side, I felt like I had a lot of negativity around me, despite being a really optimistic person–and, I found myself in a place where I needed to find some ‘light’.  I needed to find some folks who wanted to do good, and be good, and think bigger and brighter. Toward the end of 2017, as I was working though an advent Bible study, it hit me–I needed a church. I hadn’t been a happy church goer as a younger person. My first years were in a Catholic school, and I grew up attending several different churches–I just never really felt like I fit in though. I always felt like I was going to someone else’s church. I thought too hard. I dressed too weird. I asked too many questions. I wasn’t sure of my beliefs. I never really found a place to be myself, so I never really went back. However, I thought that maybe, as an adult, I might find a place that could connect me in all the ways I was craving connection.

So, I thought about it a lot. Like, almost everyday I thought about walking into a church for the first time, as an adult, and how it would be. My anxiety was making me insane about it. So, I made a list of four places I would like to try, and I just kinda let it go. The first weekend of the New Year was a mess for me. On Friday, I woke up sick. As the day went on, and as I was home with all three kids, I kept getting sicker, and sicker. Pretty soon I had a fever of 102, and I could physically see infection spreading through one of my milk ducts. I had Mastitis. My husband had a goodbye celebration planned with co-workers that night, since he was leaving his job. I called him, but immediately felt terrible for hoping he would leave to come home–so, I told him to stay. I was a little bummed he wouldn’t at least leave early to help grab my prescription–but, the timing was just lousy. I managed to, with the fever, the baby, and the four year old, drive to get my prescription. On Saturday, all I did was sleep. I didn’t get out of bed, with the exception of a shower, and to feed the baby. I was exhausted and in an insane amount of pain. It was like having Influenza–but, with a quicker, and much less contagious, outcome. I kept thinking that this was the perfect excuse to not go to church the next morning. It made me feel both relief, and failure.

Sunday morning came around, and my little one (and, consequently, me too), had had a terrible night of sleep. He just couldn’t sleep–and, if it was even possible, I felt even more tired than I was the day before. Of course, the babe also woke up early for the day–so, I was up early too. My exhaustion was so, painfully, real–but, my physical symptoms were almost gone. I checked the time for church, just in case, but I still wasn’t planning to go–this wasn’t the first impression I wanted to make. It was around this same time that my husband got mad at me for something. I don’t know what it was. I vaguely remember he was angry that I was crabby, and I remember feeling upset that he couldn’t have let me sleep in. He was yelling at me for being ’emotional’, and I was feeling completely misunderstood. Either way, it was at that moment that I decided this was it. I threw on a dress, and dressed the little guy in his cutest outfit, and I drove over the bridge into Anoka, to try out the first church on my list; the, Anoka United Church of Christ.

Now, I wasn’t completely unfamiliar with Anoka UCC; I had shot a same-sex wedding there a few years back, and the rainbow flags on the building made me feel like everyone was actually welcomed. I arrived that Sunday morning just in time for service to begin. I slunk into the back row, trying to be as un-obvious as possible–despite the tiny baby, and the pink hair. The congregation was small, but lively. Kids were up, and, well, being kids (and, their parents weren’t freaking out about it). Adults talked, even through announcements. The Pastor had a witty sense of humor that made me laugh right away. It was nice; it felt like a big, family, gathering that I knew no one at–yet, still felt welcomed at, and comfortable in. The service, itself, felt so relaxed–and easy to be present during. The sermon made me think, and encouraged me to question–I had never had that before at a church. I am a thinker by nature–I lose faith when told to blindly follow. I gain depth in my own thoughts, and can delve deeper into my faith, as I am being encouraged to actually think–it was clear that this place would do that for me. After service, I got up to quietly walk out–yet, it was obvious that I was noticed. People swarmed me to say hi, and to meet the baby, and to introduce themselves. Their warmth, especially after the coldness of my morning at home, felt so beautiful. I felt like I was exactly where I was supposed to be that morning. I went to leave, but was stopped by Pastor Chris who really wanted to know who I was, and if I would be back. His kindness, and quirkiness, had me immediately sure that I would be back.

Throughout the year, I have become a member at Anoka UCC. I have volunteered with them. I have joined a committee. I have made friends. My kids have made friends. I have helped people. I have met so many new folks–of all ages, and abilities. I have taught children in Sunday School. I have been taught, by other adults, during adult education. I have planned picnics. I have helped coordinate events. I have enjoyed coffee hour in the church basement, and I have contributed to many potlucks (and even a good, old-fashioned, bake sale). I have donated to shelters. I have used my skills to benefit the church. I have attended parties with, and without, my kids. I have had coffee dates with other moms, and play dates with all of our kids. I have listened, and been heard; I have made connections, and I have grown spiritually.  I needed all of these things–without even, fully, knowing I needed them. I just knew I wanted to be more ‘involved’ in some stuff.

I never did make it to any of the other churches on my list. There wasn’t much of a point; I knew I had found my people. It was the second week I went to church that I actually saw the sign–the thing that made me sure that I was where I needed to be. It was this–a literal, physical, sign: 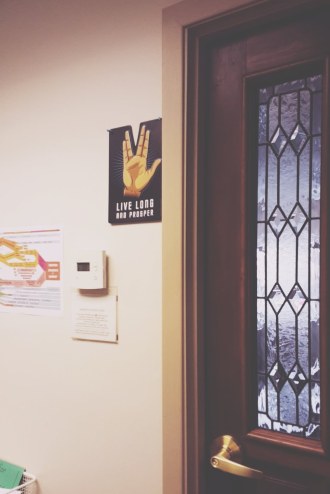 If you know me, at all, you probably know that I’m a huge Star Trek geek. ToS is my favorite, and Spock has always been my favorite character–so, when you’re walking your crying baby around, and you see this outside your Pastor’s office–you know it’s a sign you’re where you need to be. (Both literally, and figuratively. ) ((Also, just FYI, this sign is just the tip of the iceberg–his office is every geek’s dream.  From Star Wars, to Doctor Who, to Harry Potter–with, a TON of in-between, it’s all represented in there. It’s amazing.))

Anyway, this post got long, huh? I could keep going too. It’s really fun to have a place like my church to belong to–I never thought I’d find a church that I wanted to belong to, let alone a church that I fit so easily in. (Bonus? I can actually just be me–exactly who I am, and still fit right in. That’s pretty special. ❤ )