The other day, I spent an entire post chronicling my other job.   I’ve been busy over there lately–working in retail , no matter WHAT role you play–this is the beginning of the busy season.  We’re working to get both physical, and email, mailings ready to go out to corporate clients prompting them to remember to get their employees/clients a gift this year.  (Preferably of candy.  Preferably from us. 😉 )  So…it’s been a lot of candy posing, picture making and trial and error over there on my end.  With this blog, I thought it might be kind of fun for you to see what the behind the scenes looks like for a few of my photos.  (I don’t know why this fascinates me so much…but it totally does.)

I had never really thought about the BTS before I started shooting so regularly.  I mean…if the photo looked pretty, who cares?  A good photo looks effortless.  (In reality, to make that good photo…it’s rarely anything but that.)  When I realized that things weren’t effortless, I actually thought that I must be doing something wrong.  My BTS was a disaster with strings, and rigs, and anything else I could find/create to make my shot look like how I saw it in my mind.  Then, as my social circle began to expand with other photographers, I realized we all pretty much do it the same, just in different ways.  I guess that as long as the client doesn’t see what’s behind the curtain, so-to-speak…we can keep the magic happening?

I’ll start here…this is something I put together for work.  It’s simple.  The candy box stood up by itself and didn’t get much glare from my flash and/or the other lighting in the room.  The background ornaments were balanced, to balance out the box of chocolate, as well as make the shot have some sort of a holiday feel.  The white, background it was shot on though…

…well, that was hanging down, from metal shelving in the employee kitchen.  I used basic, black metal clips to secure it.  I was able to hang ornaments down from the above shelving for some shots as well.  It was an awesome way to make these shots work.  Metal shelving…super handy 🙂 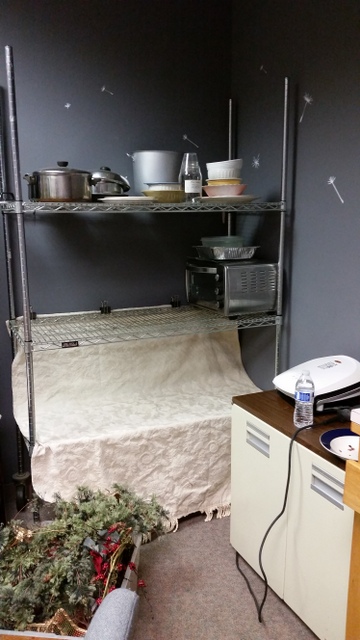 This BTS is actually from a bit ago–right around prom season.  I was photographing corsages and boutonnieres for our website and FB page.  The photo on the top is how my set up looked.  I was shooting in the middle of the back room of the floral shop, on a counter that is used for floral design.  I had the sheer, purple, fabric, secured by closing it into the cabinets that are there.  The bottom shot was what my final ended up looking like.  Standing back far enough allowed me to really open up that aperture and get a super pretty, blurred, background effect.

These shots are the last after/before that I have for ya today.  They are both for corporate clients.  The first one is the ‘pretty one’–as I call it.  That’s the one that would pull me in and make me click to see more.  The photo on the bottom is to show customers all that they will receive in their package.  (Just FYI: If you’re in a position where you would like to send candy or flowers for gifts, for the holidays, or as thank you’s–let me know.  I will point you in the right direction 🙂 )  Obviously, the bottom photo isn’t just a bunch of candy, laid out flat.  It’s built up a bit, and ‘posed’, a bit, to give it some depth.  Check out the next set of photos to see what’s behind…

Okay.  So, this is where it gets un-pretty 🙂  The photo on top, is shot from straight above.  When the candy leans back, the wrappers catch a ton of glare from the lights above–so much so, that sometimes, the packaging is difficult, or impossible, to read.  I try to make sure it’s all as glare free as possible–though that can be quite difficult.  (Especially since if ONE has a little glare, and you move it–the other candies tend to crash over–much like dominoes.)  I stacked candy cigarette boxes in a stair formation in order to stack the candy for my camera to see it all.  The Birch Bark was heavy though and kept pushing the cigarette boxes backwards, and then falling over.  I was shooting in the kitchen again, so I grabbed the first, heavy, thing I saw.  Someone’s, uneaten, fruit.  It worked like a charm and was slender enough to not show from the front.  The bottom photo shows, well, me and also what it looks like from behind.  The candy cigarette stairs, the fruit and the stacking.

Like I said…I don’t know why this fascinates me so much, but it does.  I hope you enjoyed it too–at least a little 🙂